Geometry Apartment is located at the border of old, historical city center of Krakow, Poland. Apartment is situated at the first floor of modern tenement house. This project follows the consistent geometric division of space 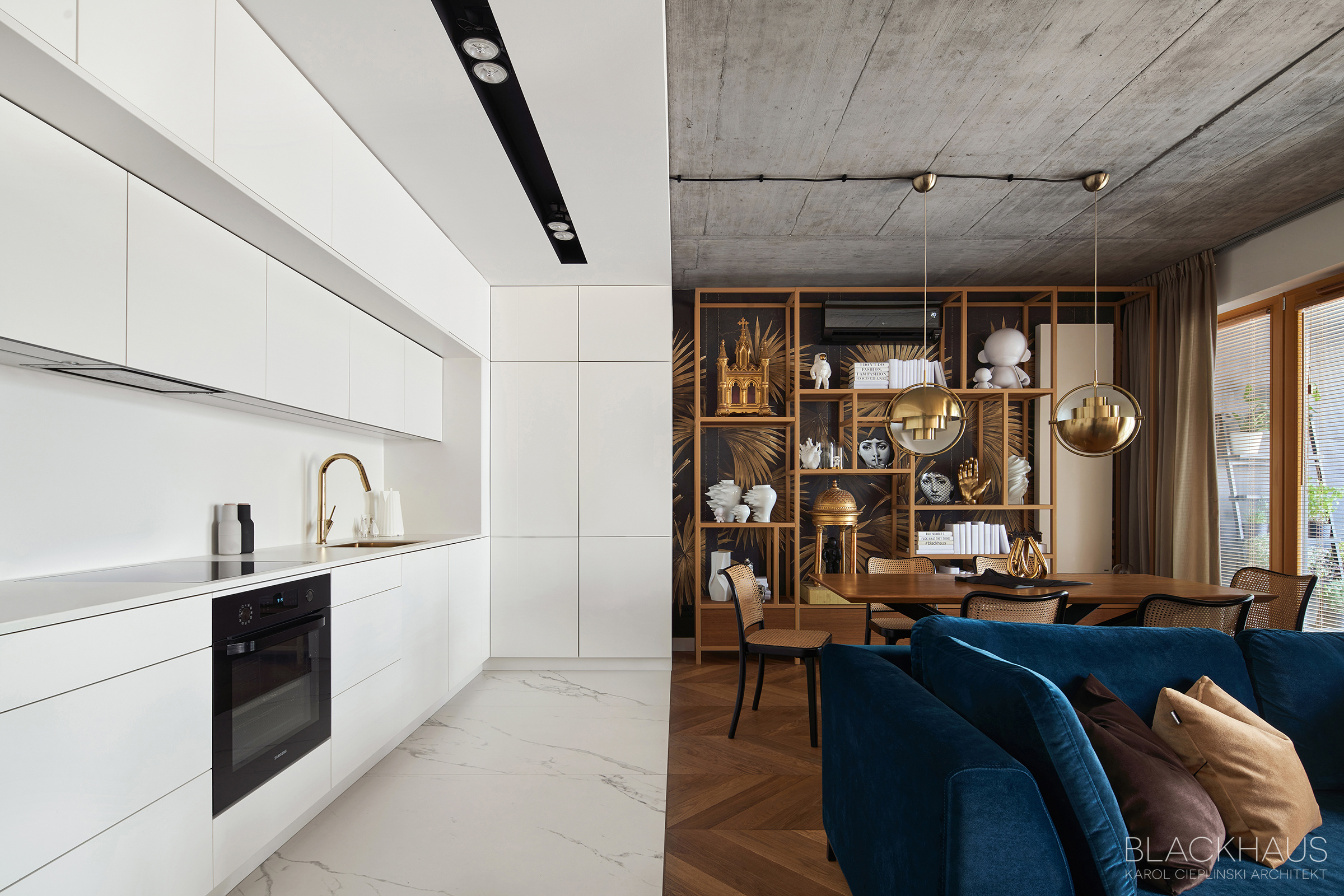 Originally, 53 meters apartment consisted of 3 rooms, a corridor and bathroom. The 2.70 m high apartment with large windows seemed much bigger and more overwhelming due to the number of rooms and functional division. The owners wanted the space to be as open as possible. They decided to buy the property when the building was constructed. Seeing the reinforced concrete ceilings, they decided to leave them without covering by plaster. They were made so well that even the randomness of the formwork tops was not an obstacle for them to achieve the impression of coziness and orderly space. In the final version of the project, all the walls have been demolished and rebuilt. The kitchen appeared in the place of the hall. There are hidden wardrobes for outerwear. The zones of the apartment – the living room and the kitchen – although they are included in one space, they have been clearly defined and the cards are harmoniously combined with a geometric play of shapes. The kitchen line is lined with Italian panels made with a carrara marble pattern. Lifelong materials right down to bathroom, where it meets the stone model of large-format ceramic slabs. Its color is matching the exposed reinforced concrete ceiling. And so we have continuity in the workshops, i.e. meeting in all areas -
a geometric division that gives the apartment its order. 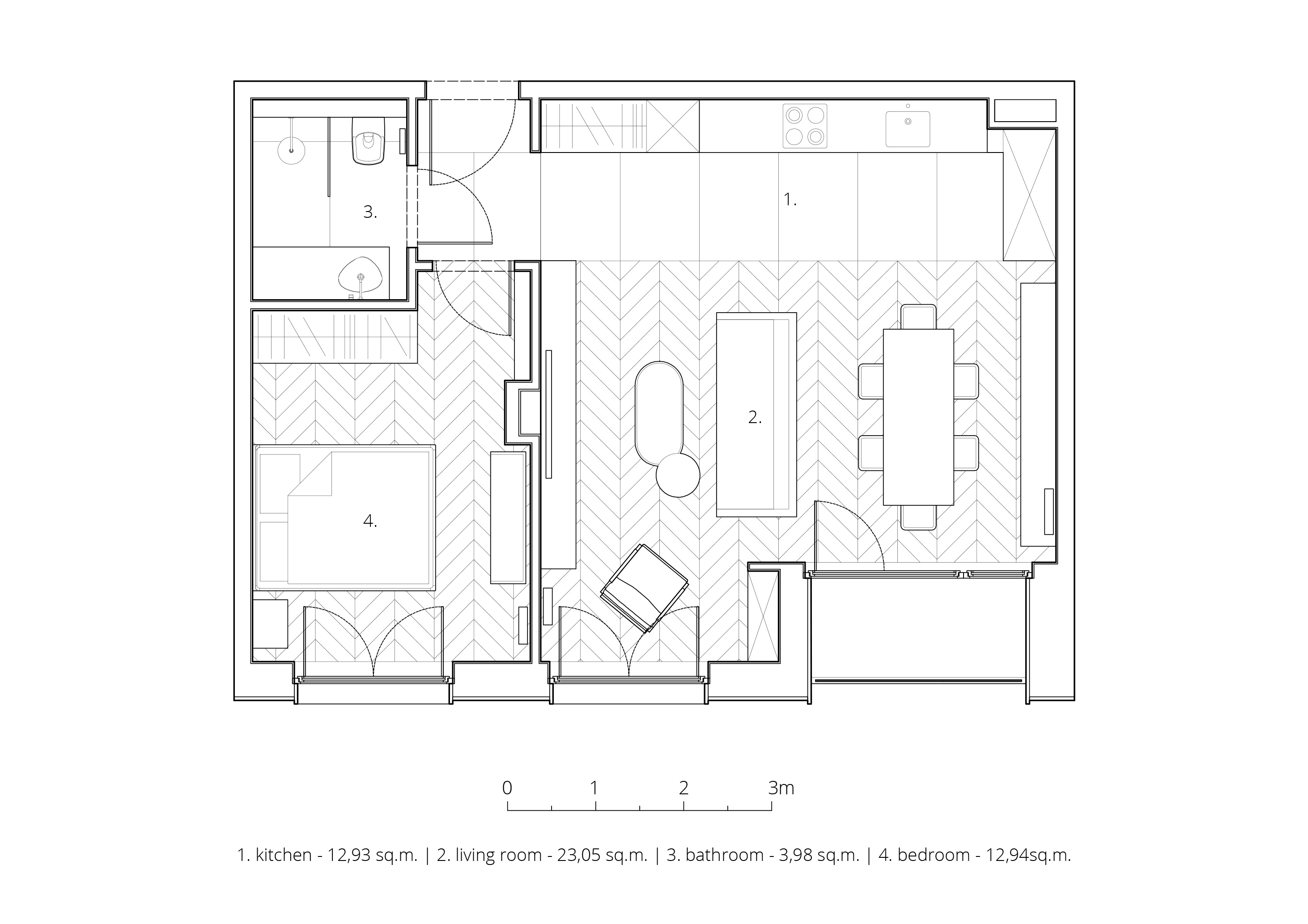 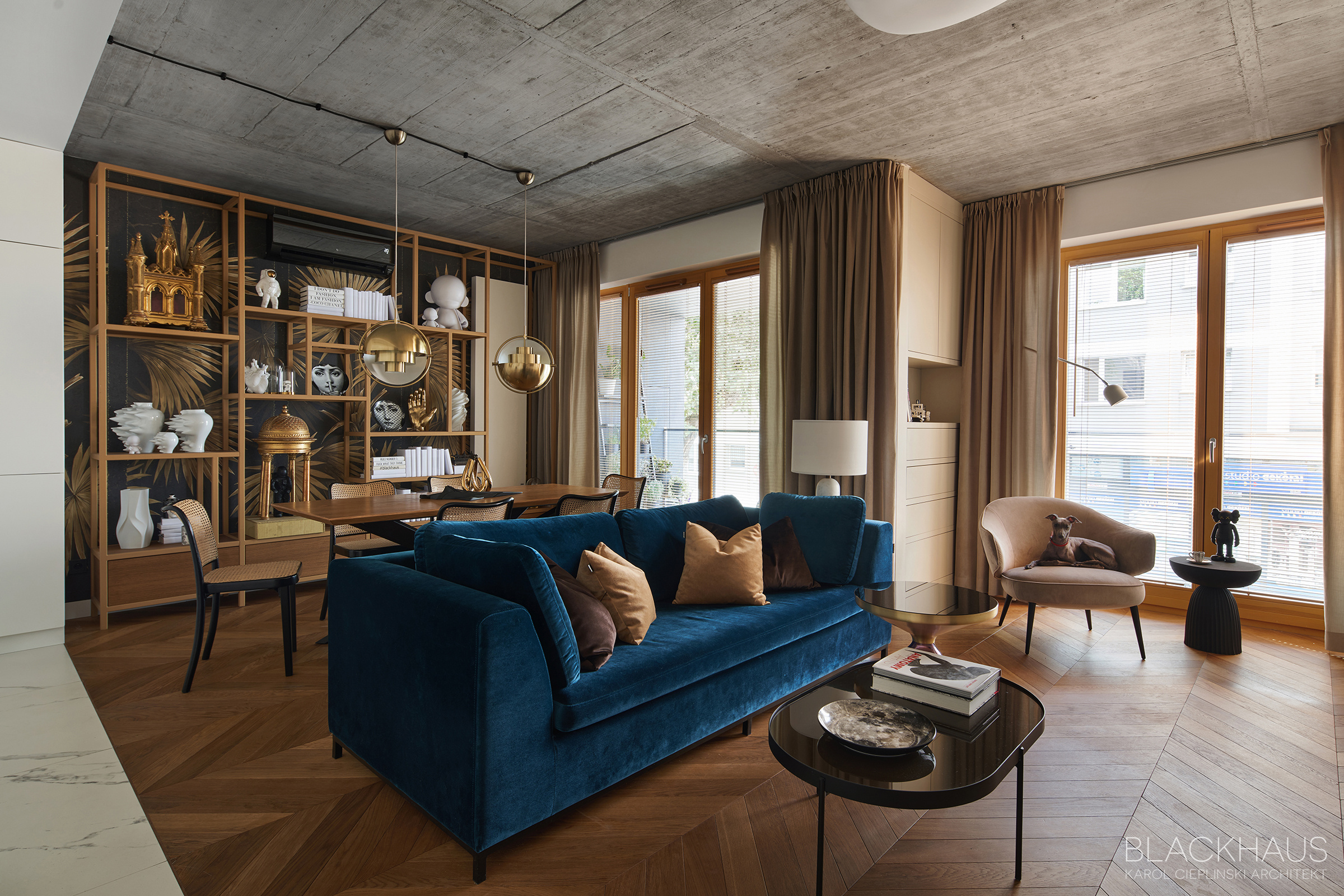 Throughout the apartment, great attention has been paid to details and the way in which the materials are combined. The divisions of the marble tiles repeat the division of the oak floor. The French herringbone was adjusted to the width of the ceramic plates so that the joints of the successive stripes became divisions of the tiles. The suspended ceiling over the kitchen area has a gap that delicately tears it away from the reinforced concrete ceiling. Thanks to this, this discreet detail allowed for a non-invasive routing of cables to the lamps. Discreet doors and forged skirting boards were used throughout the apartment - thanks to this, the clear geometric divisions of the apartment are even more visible.

Soft wallpapers, velor curtains and upholstery were used to soften the severity of the concrete. The principle based on layers of superimposed elements was used in creating the apartment plans. And so, on the black wallpaper with a golden pattern of palm trees, a steel bookcase in golden, matte varnish was placed. There are porcelain vases on the bookshelf in a white color referring to the white surface of the decorative radiator. It was chosen in this color on purpose - it was to become another element of the shelving arrangement. White ceramics were juxtaposed with family souvenirs – antiques, brought from different parts of Europe - in the color of old gold. This color scheme runs throughout the apartment and gives it a consistent character. The material of the sofa in the living room refers to the colors in the bedroom - hence the sense of harmony and the keynote running through the entire apartment.

All the furniture in the apartment – apart from the sofa set – has been specially designed. The golden bookcase – its geometry – has been adapted to the thing’s owners own. Particular attention was paid to the bedroom. The high-gloss black bed was upholstered in the same material as the indigo curtains, additionally trimmed with a maroon silk roller. The bed is a complete set with a chest of drawers - also in black with golden elements. Gold is a new material - liquid metal, specially applied and polished. The dressing table by the bed was covered also with this material. This room features wallpaper - a tropical forest pattern, in which we can also find the colors of the apartment. 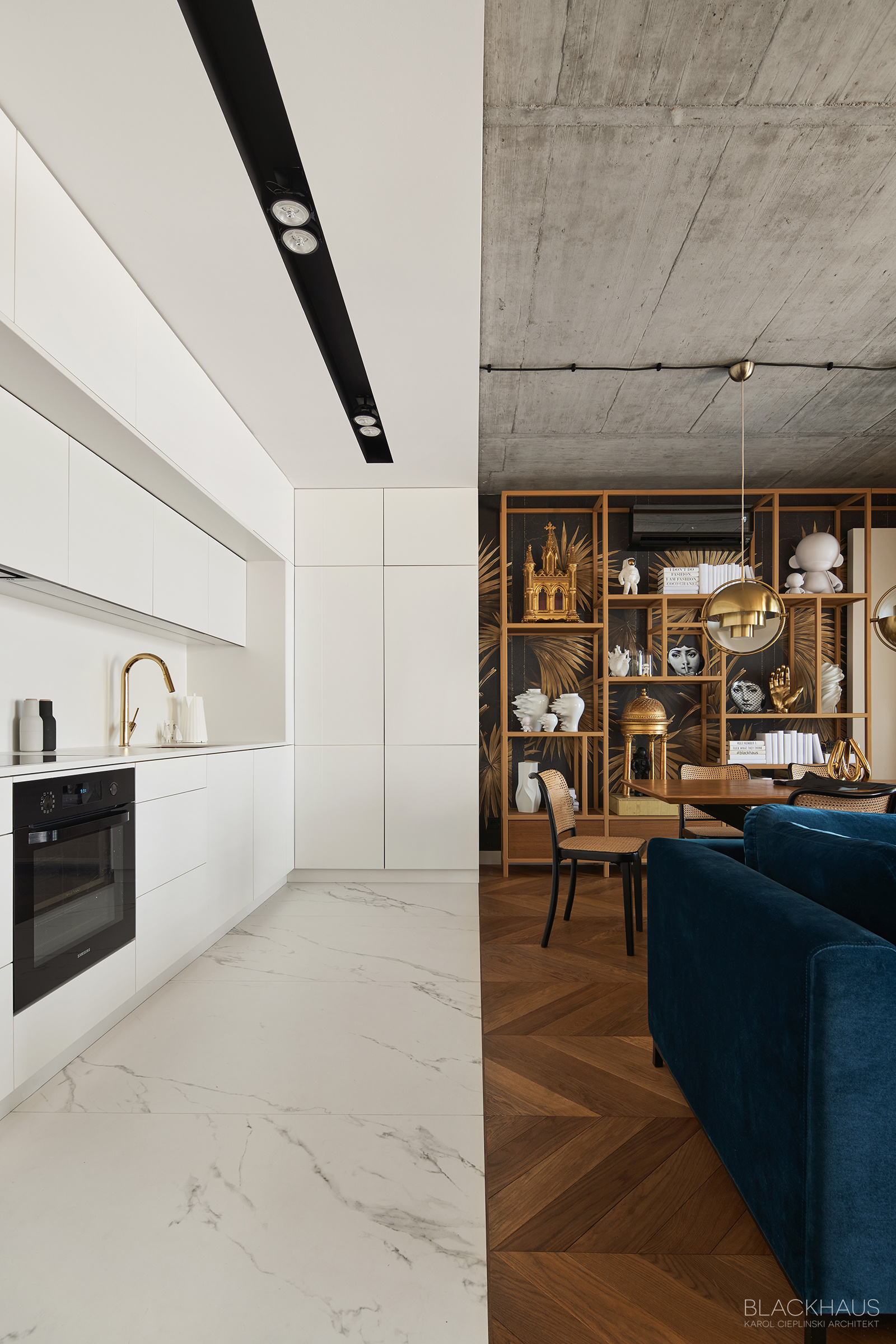 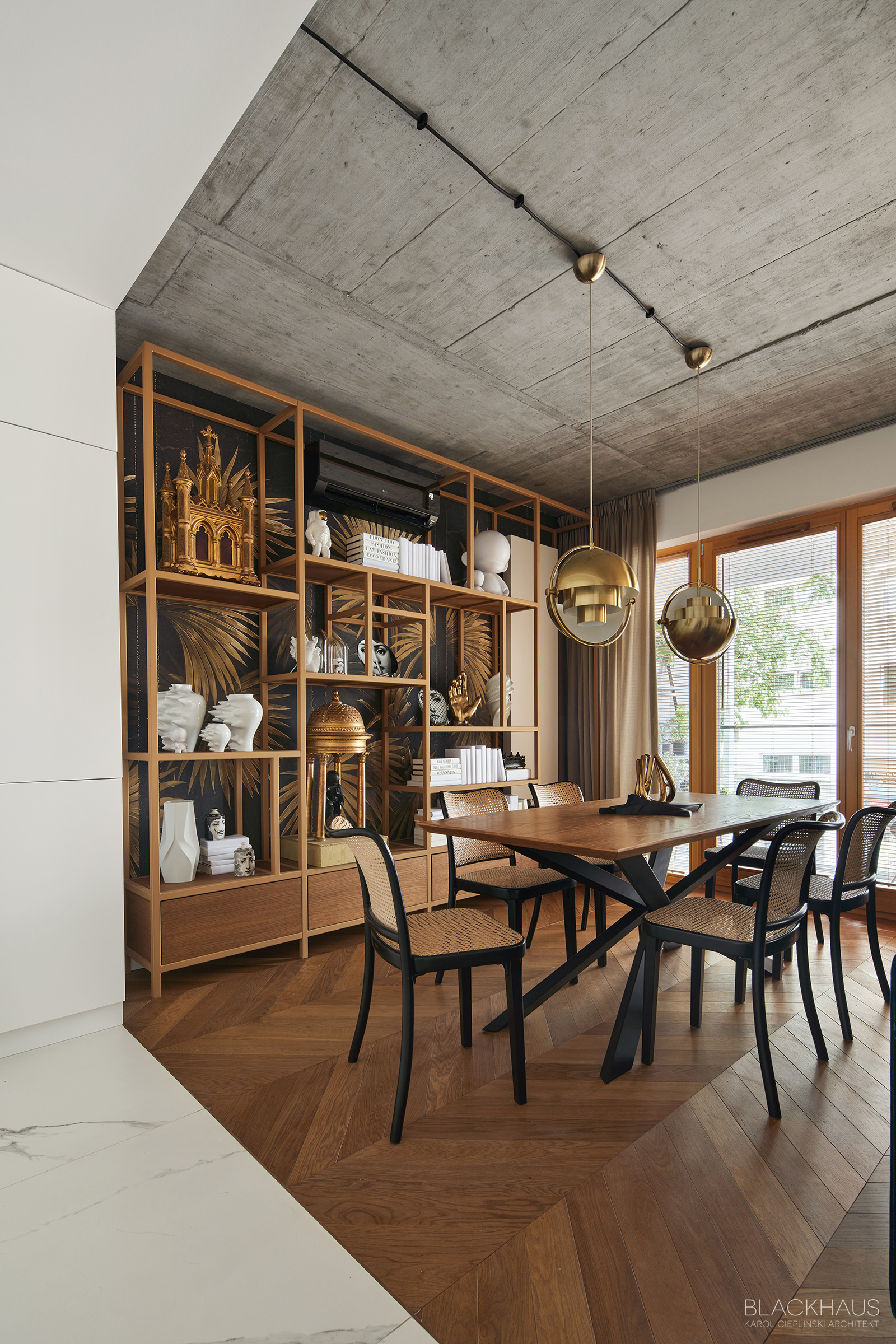 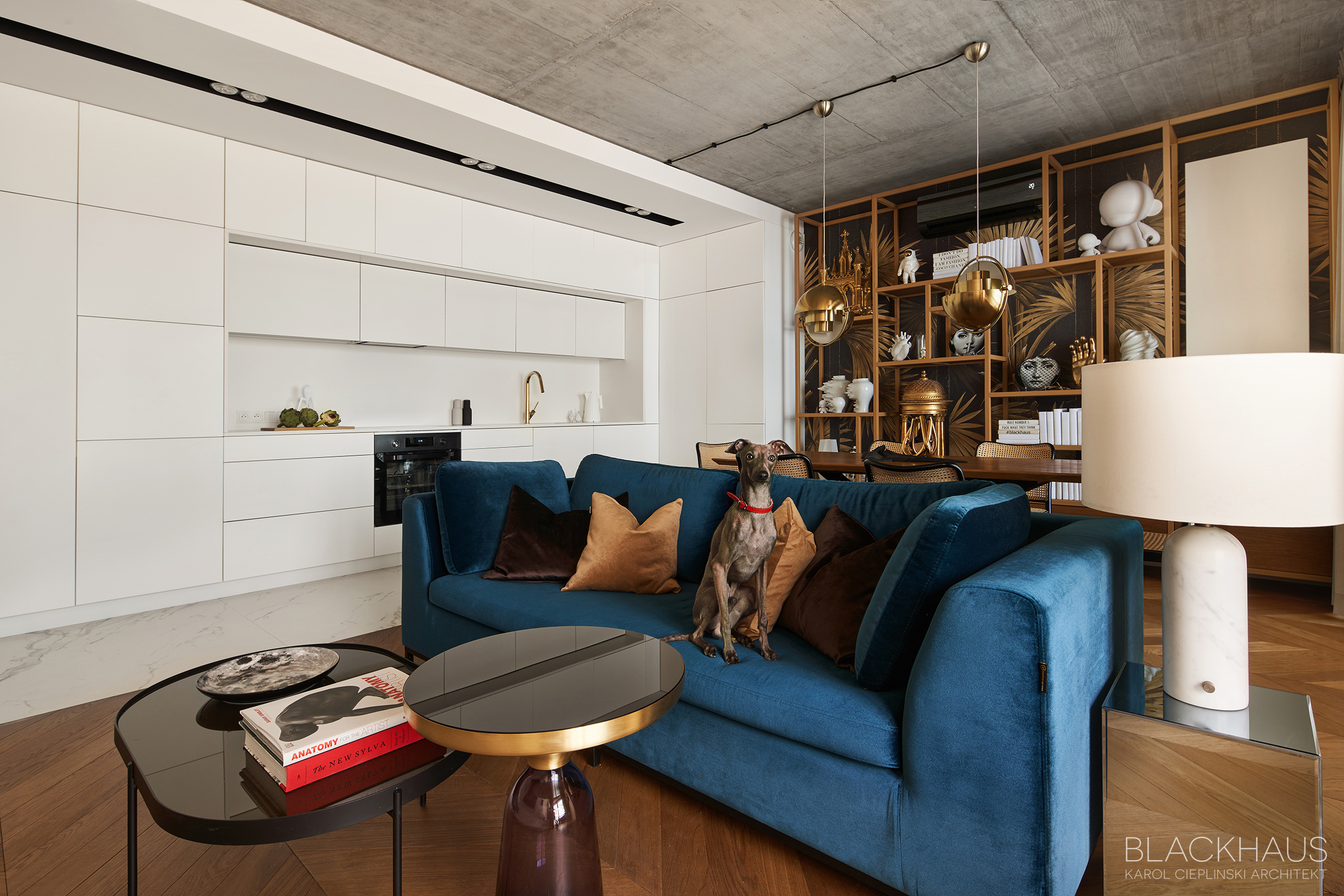 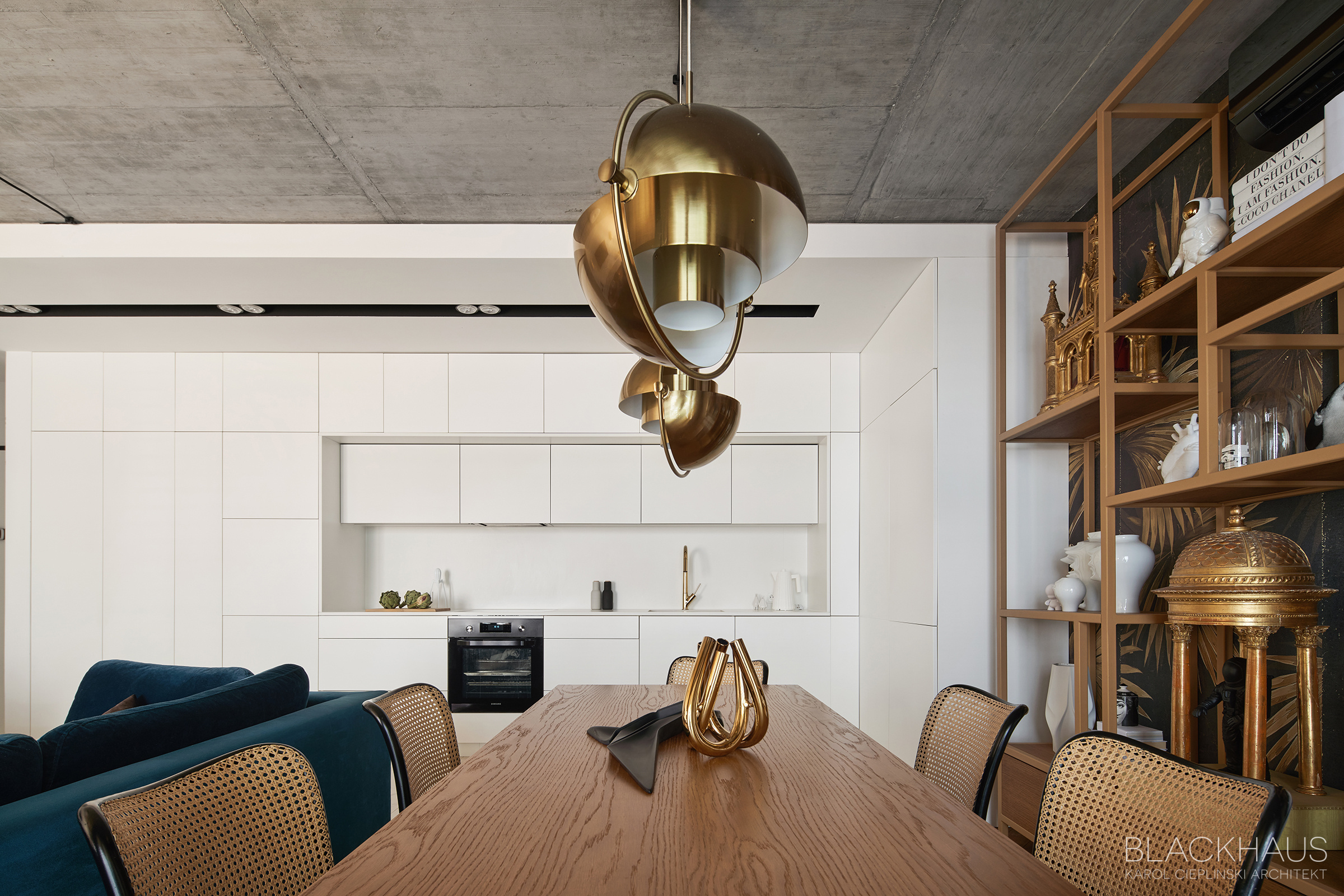 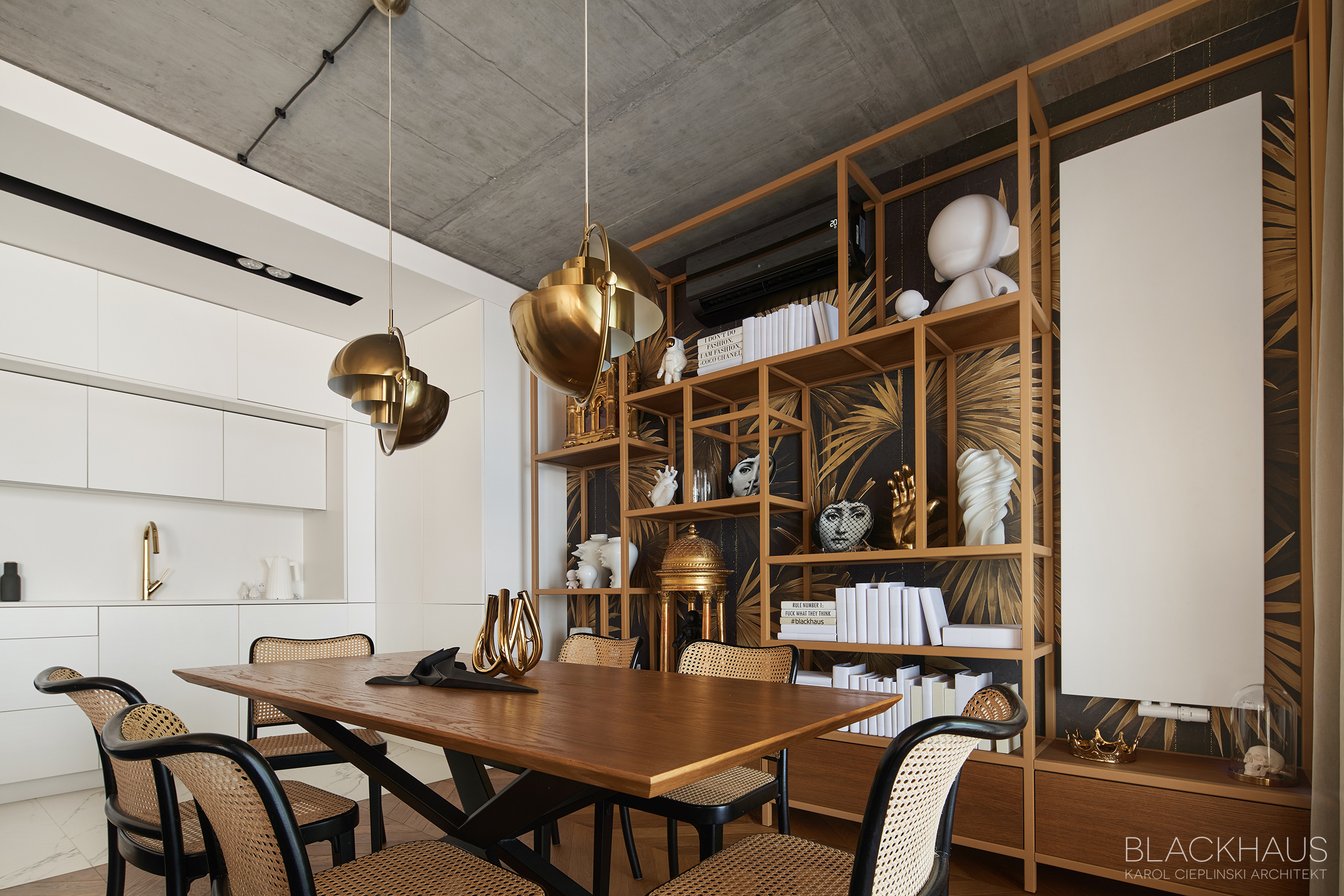 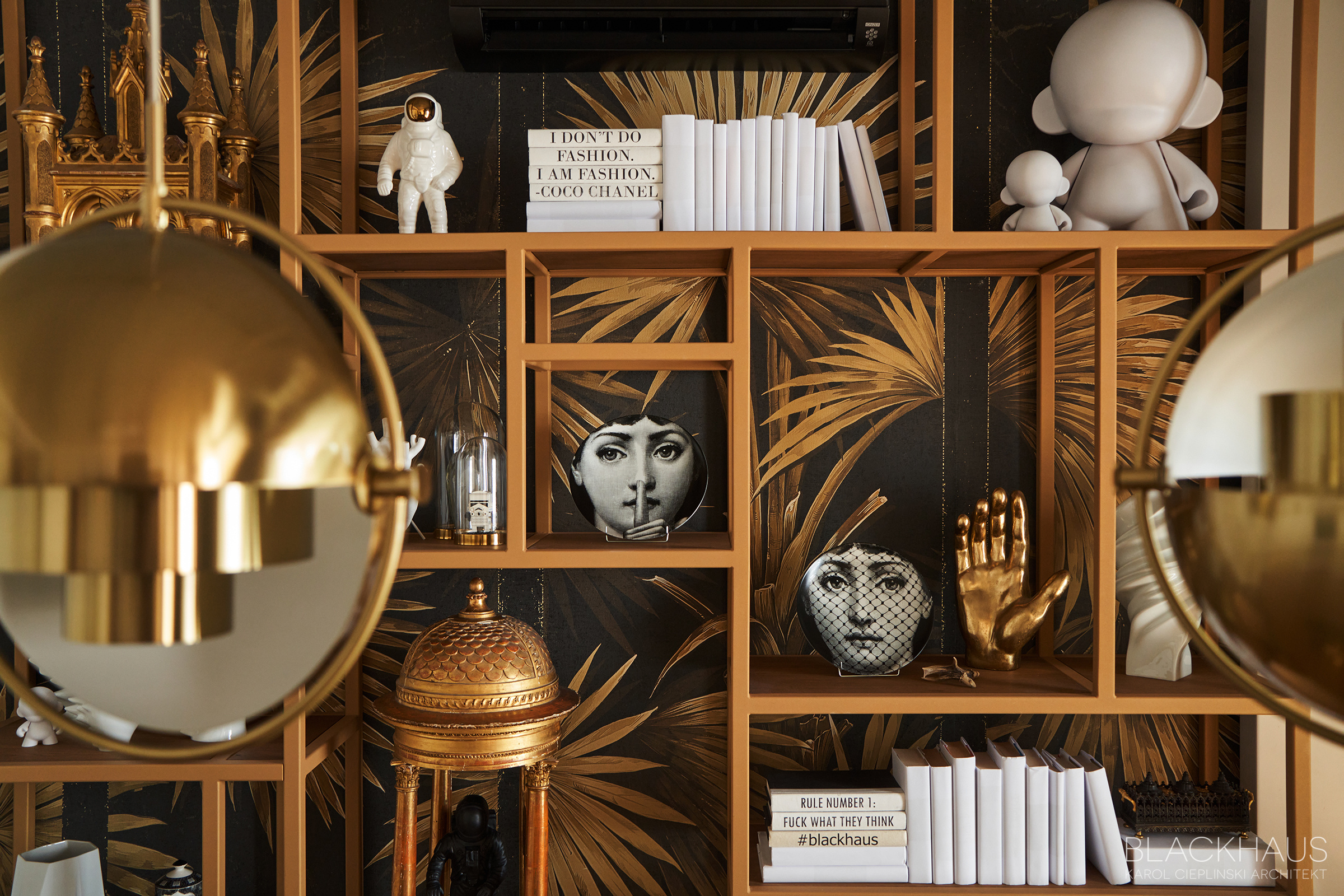 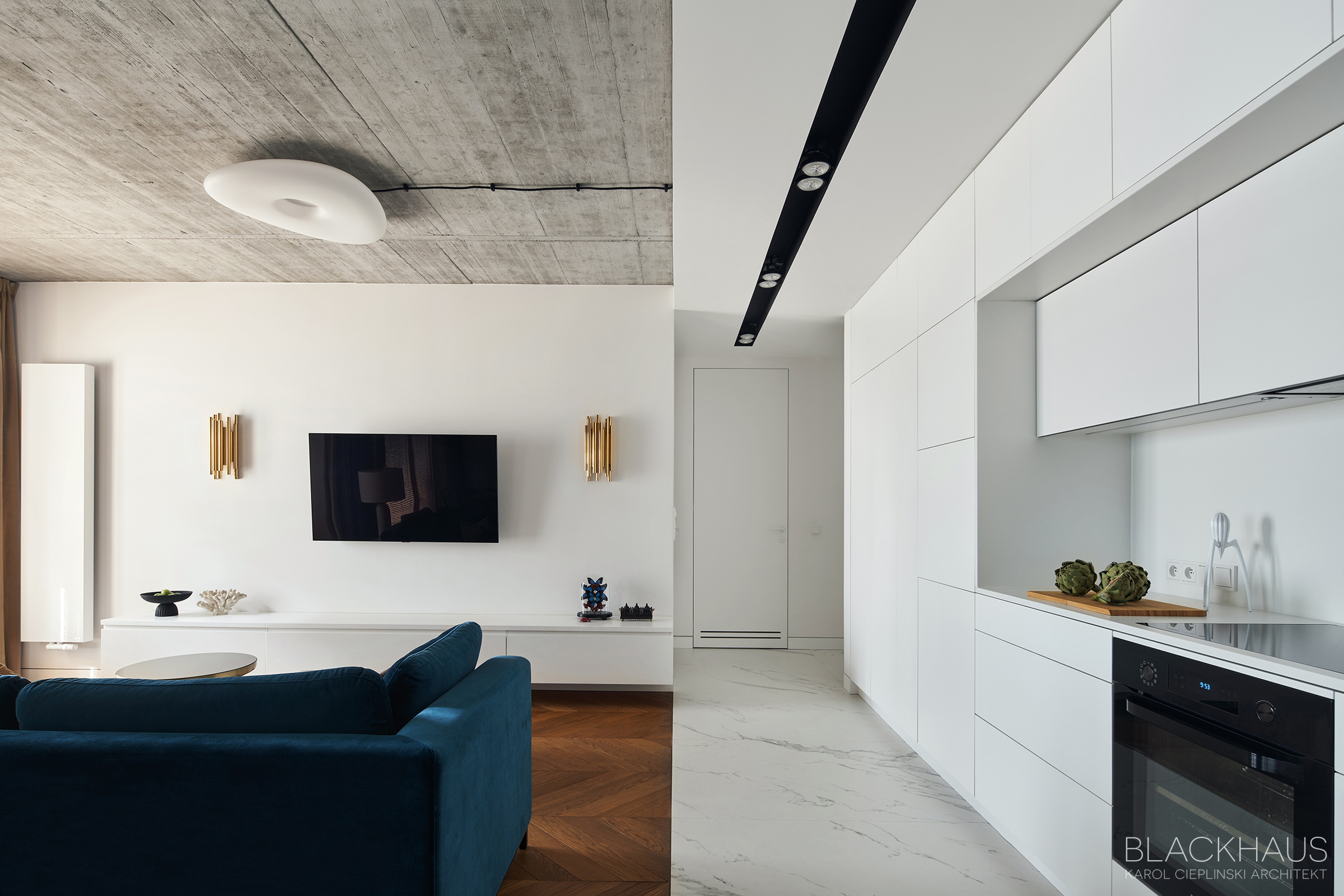 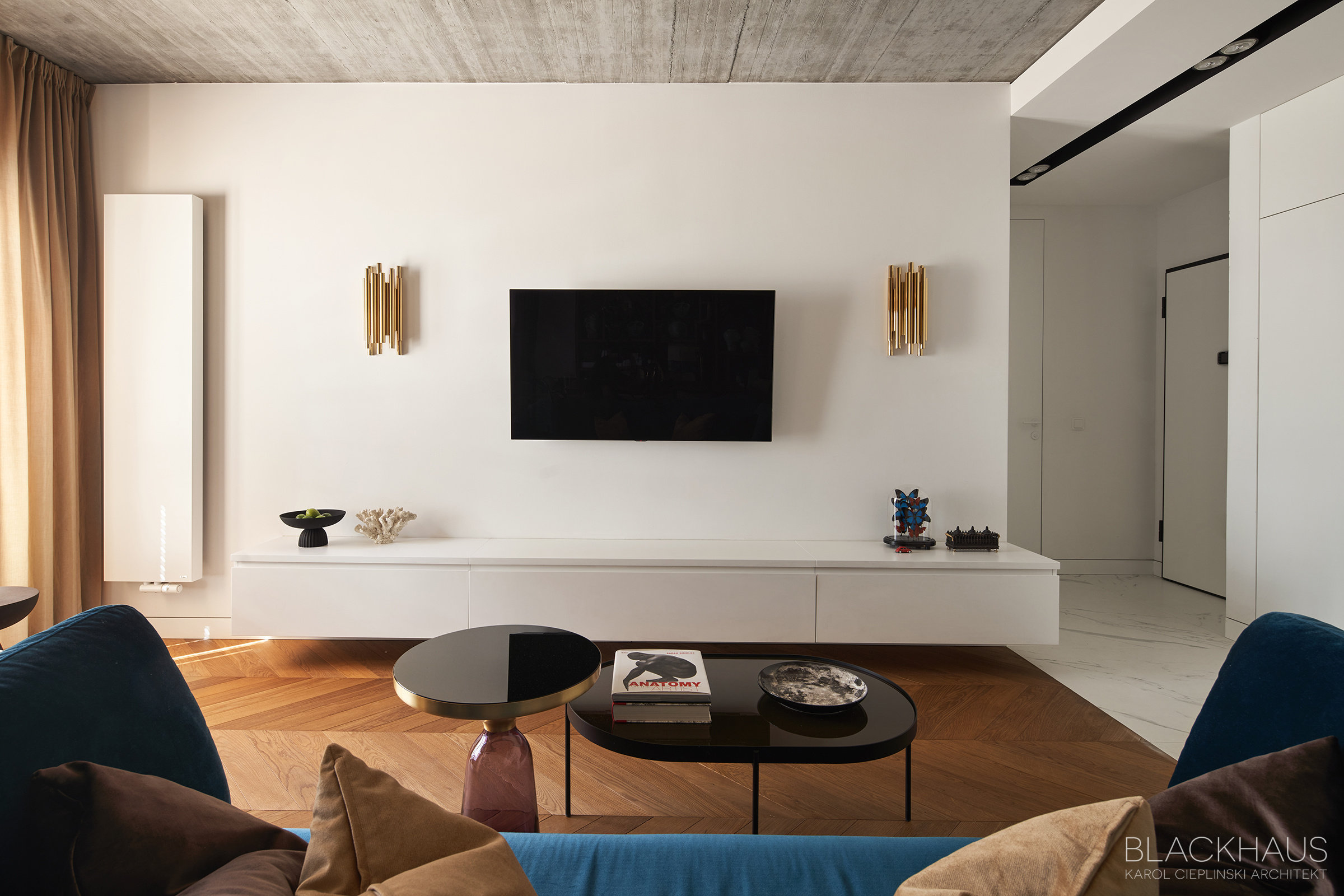 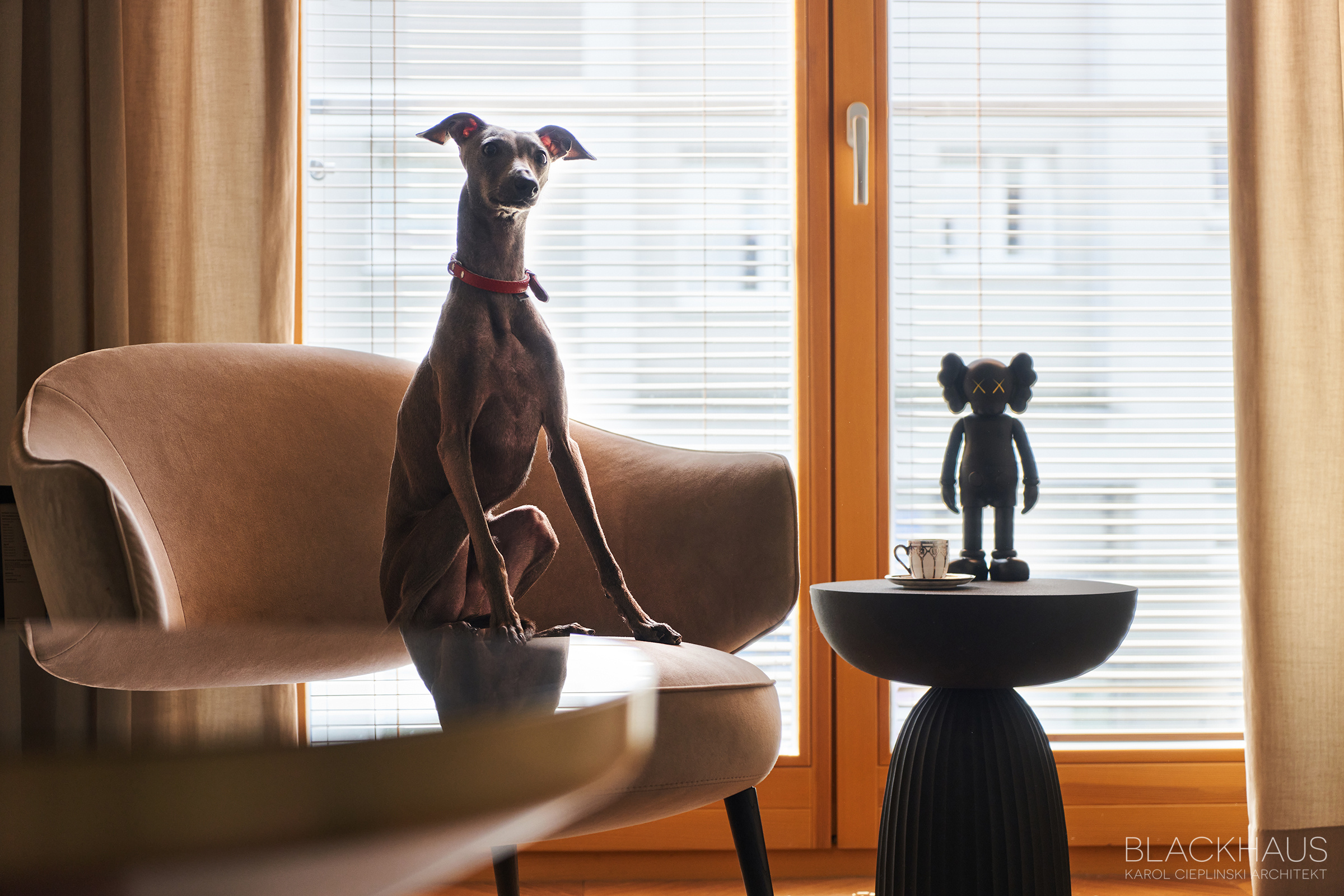 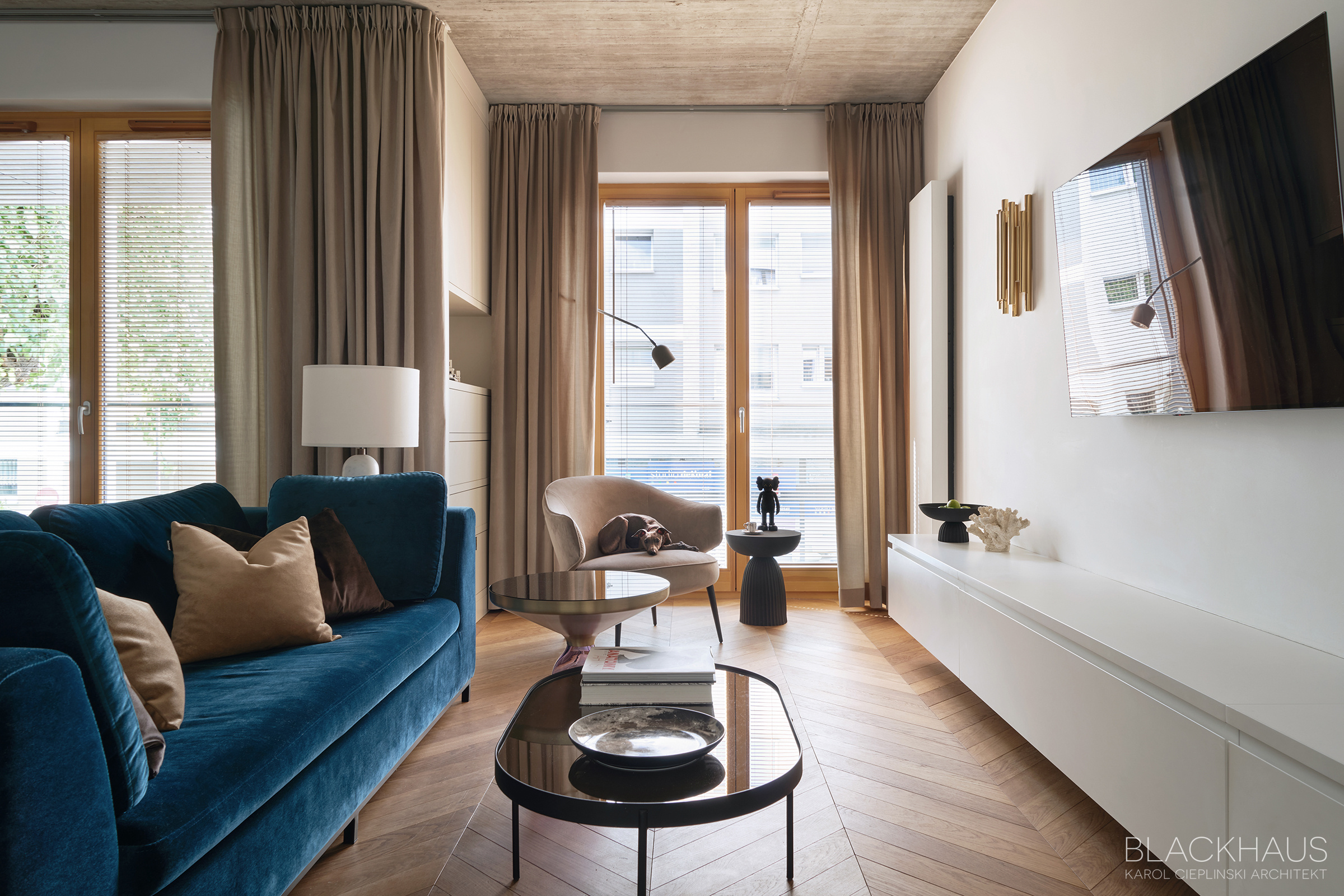 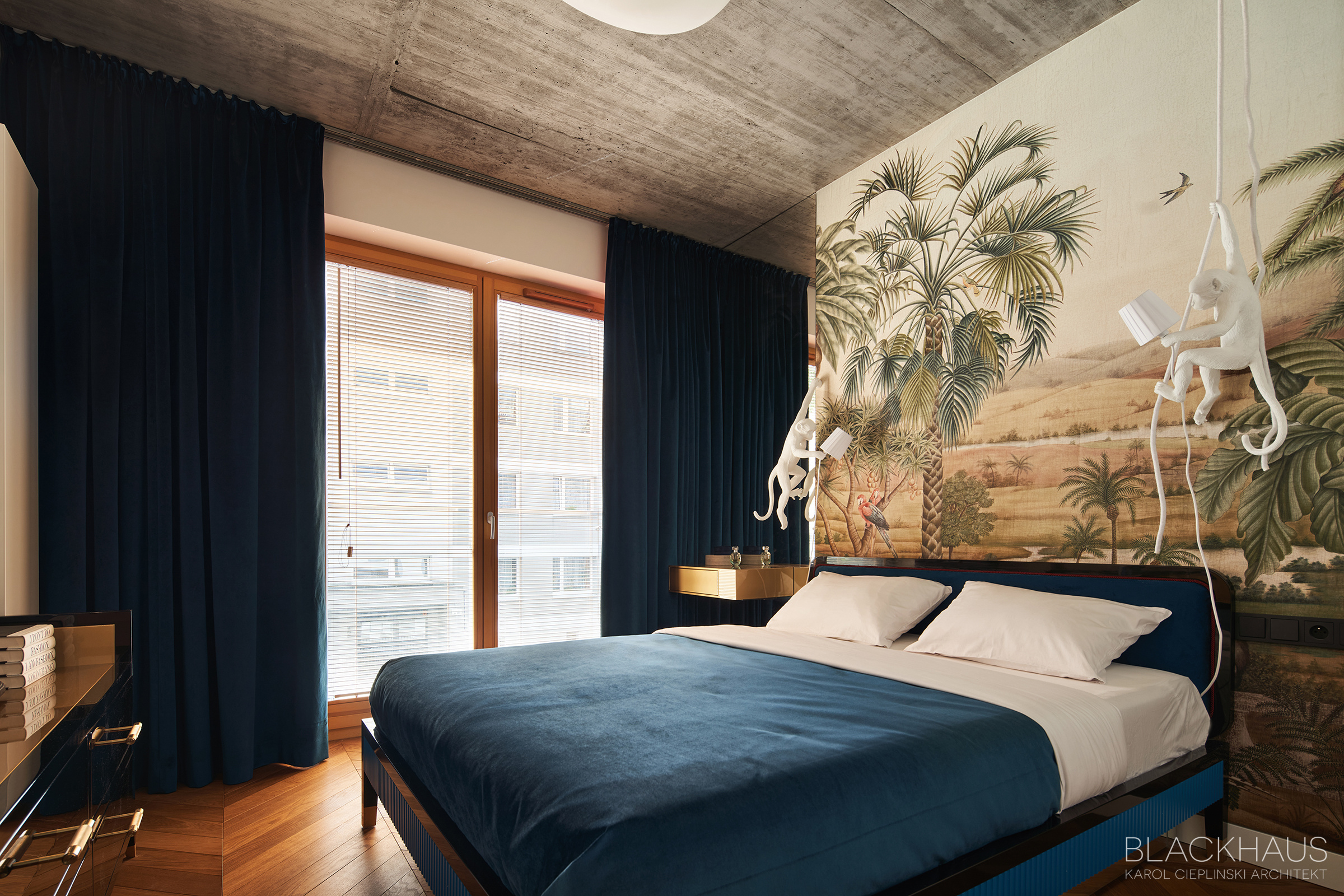 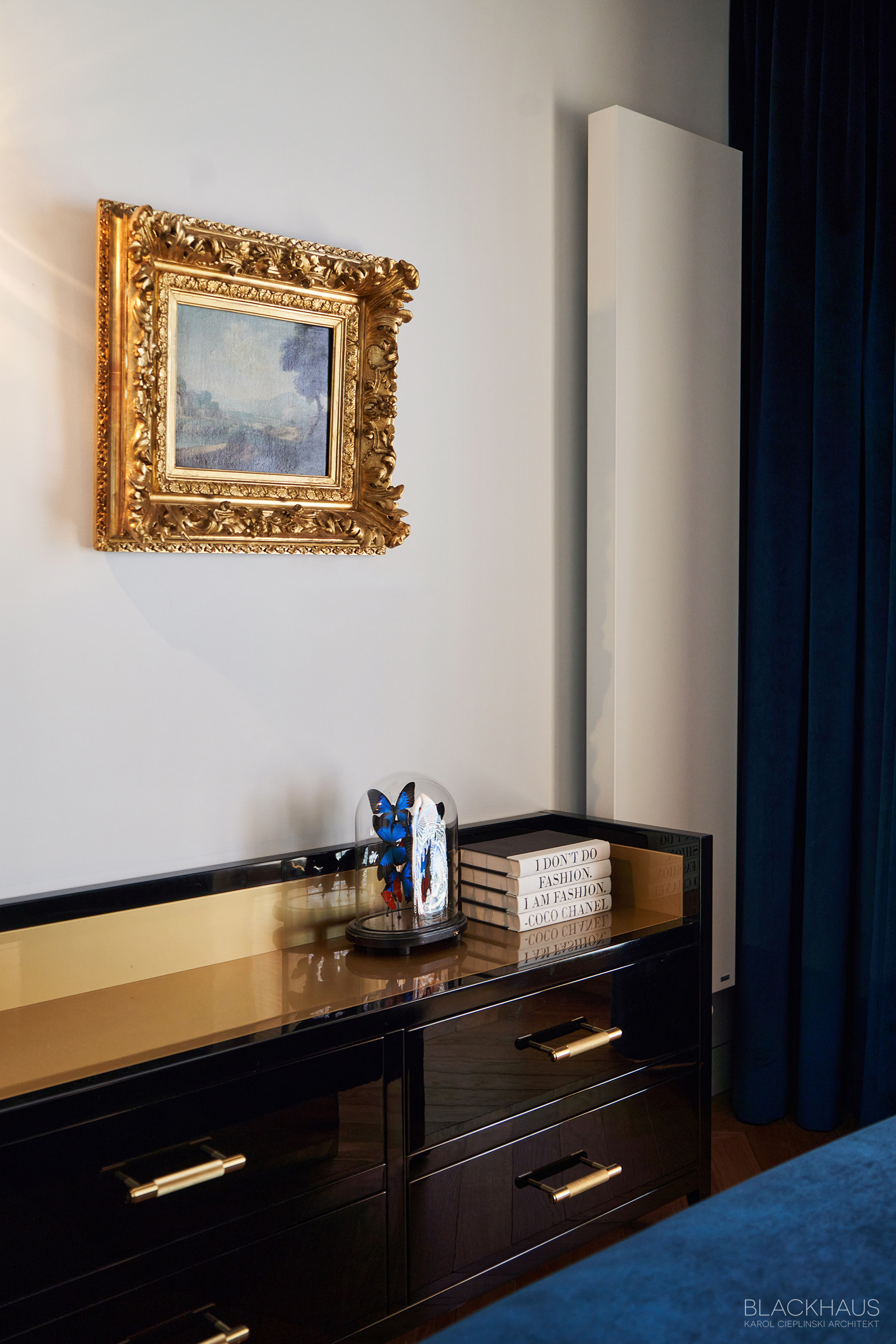 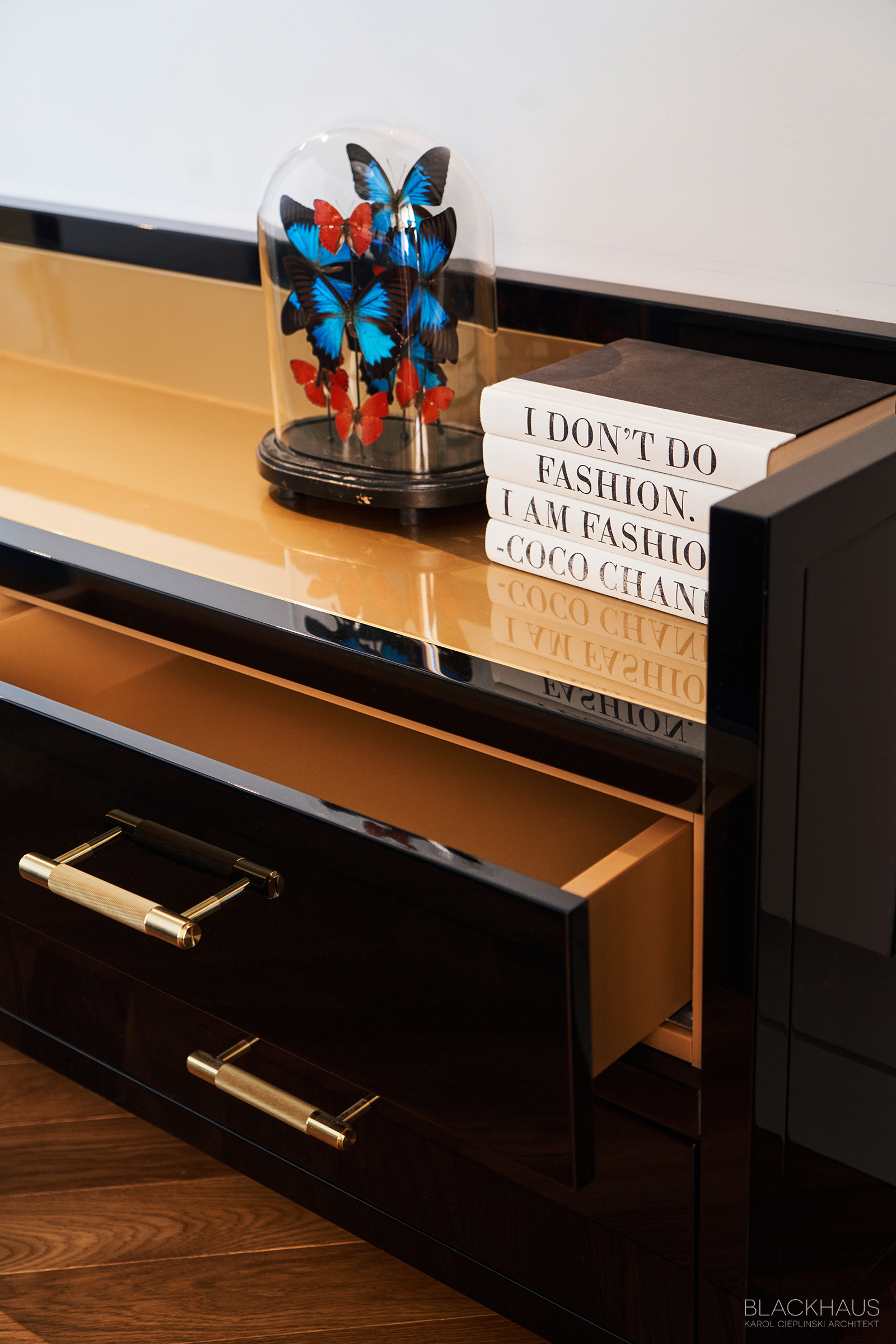 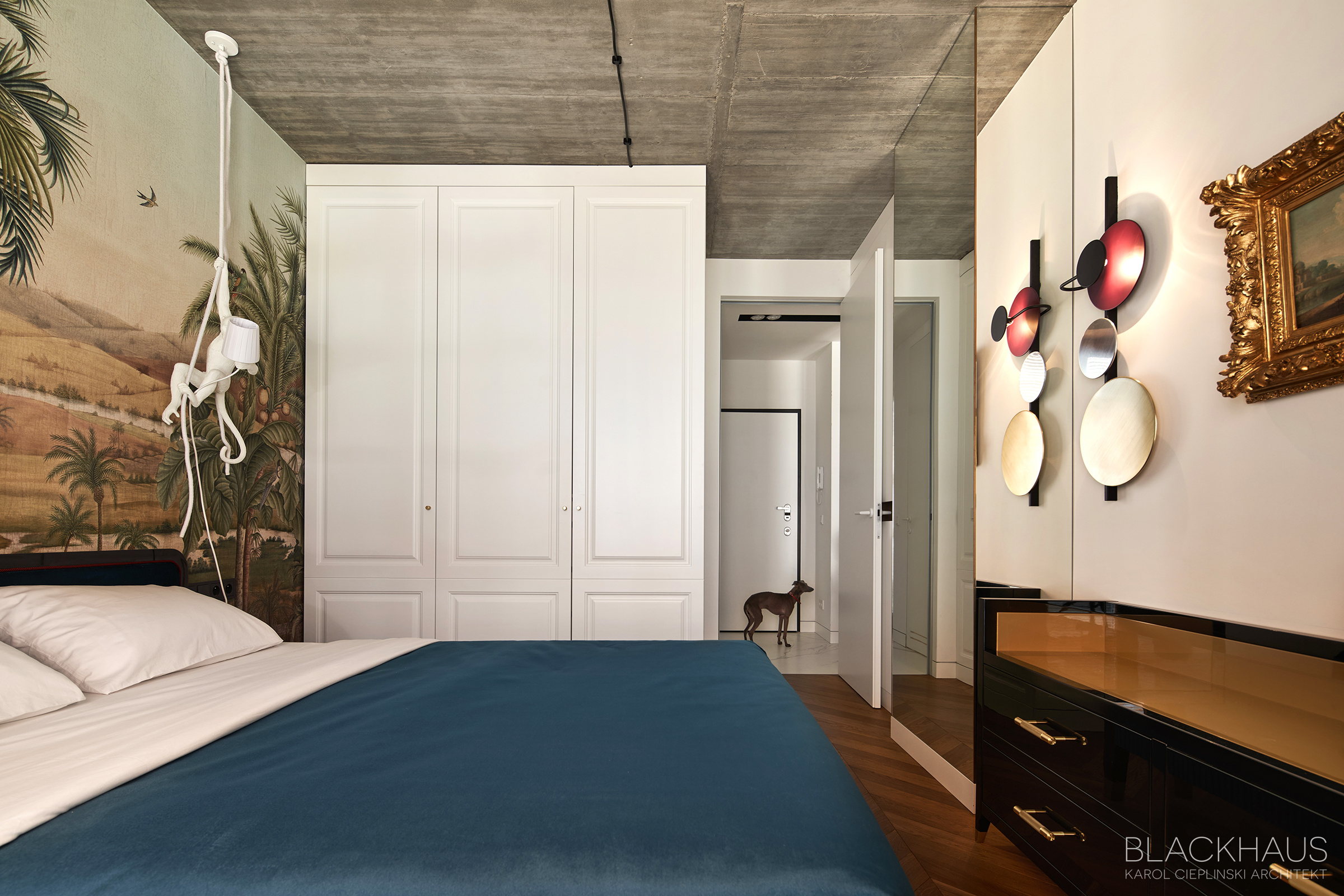 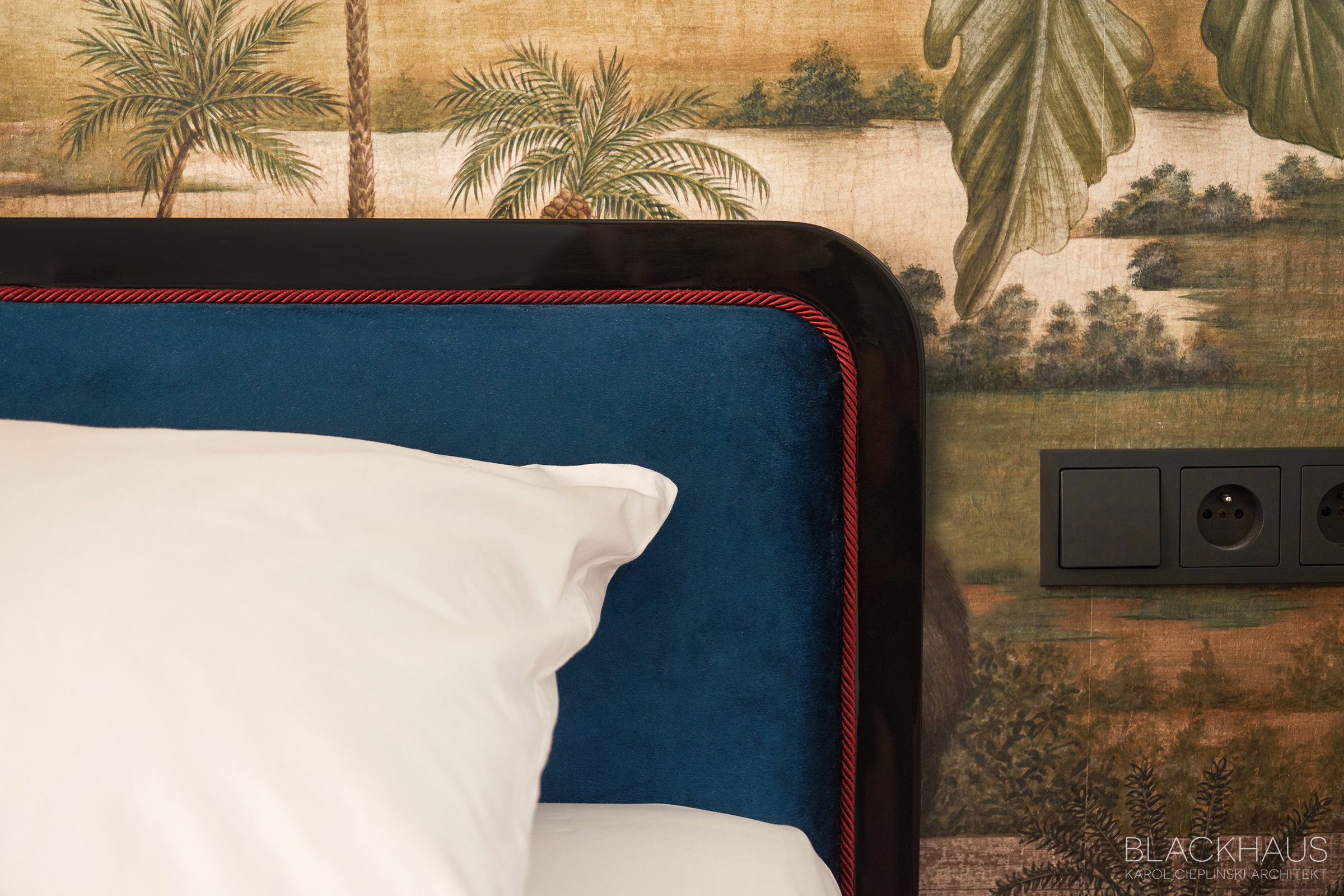 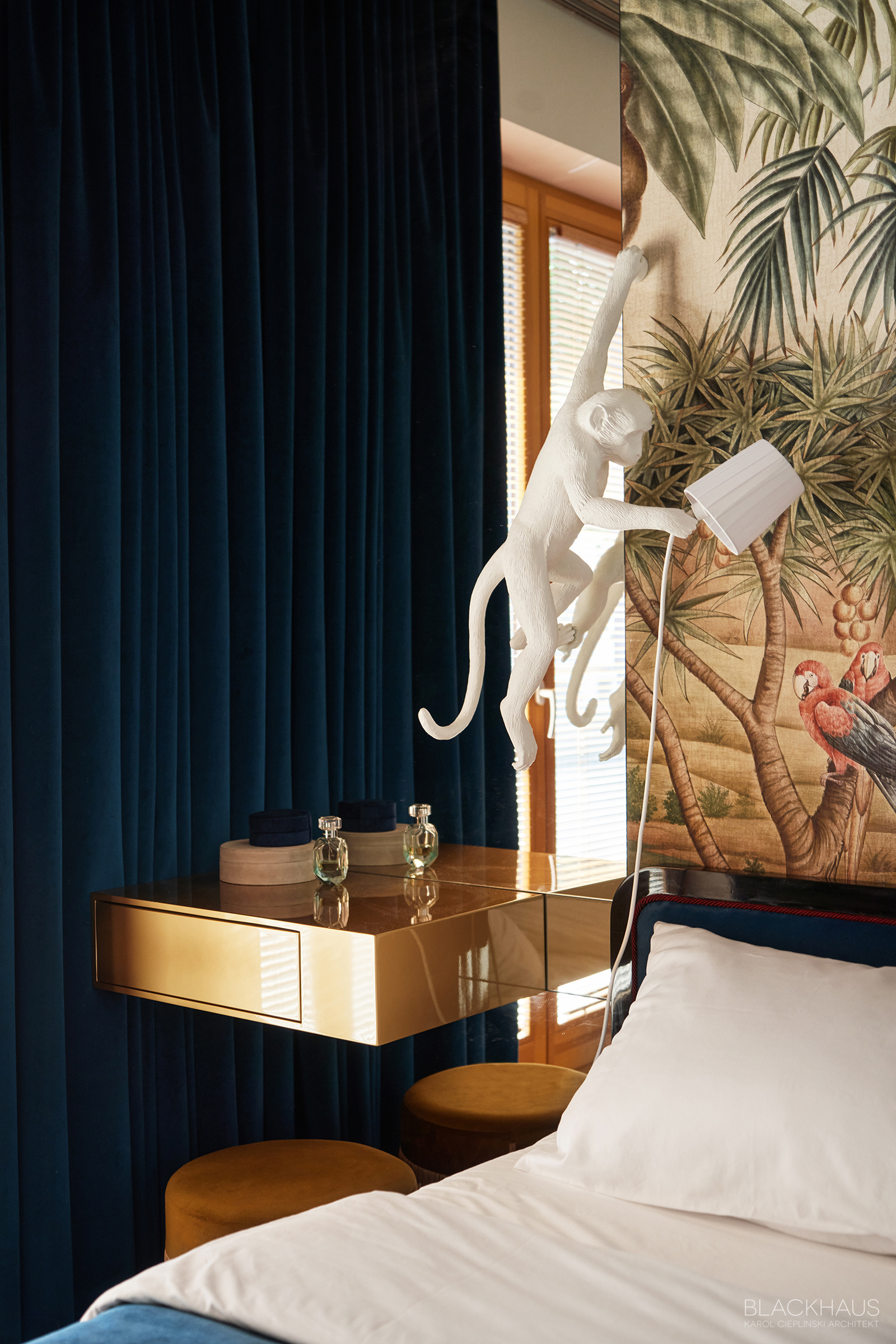 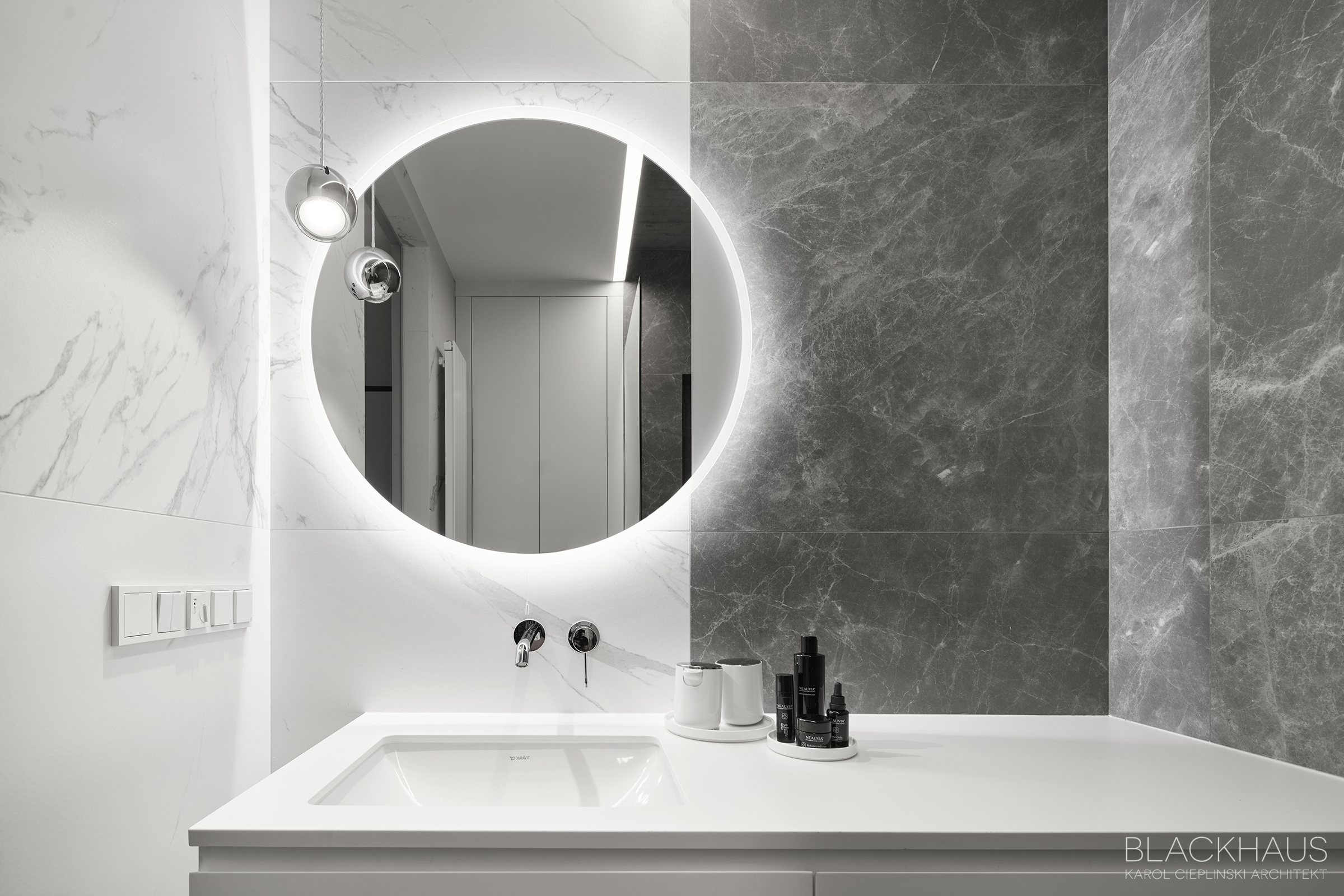 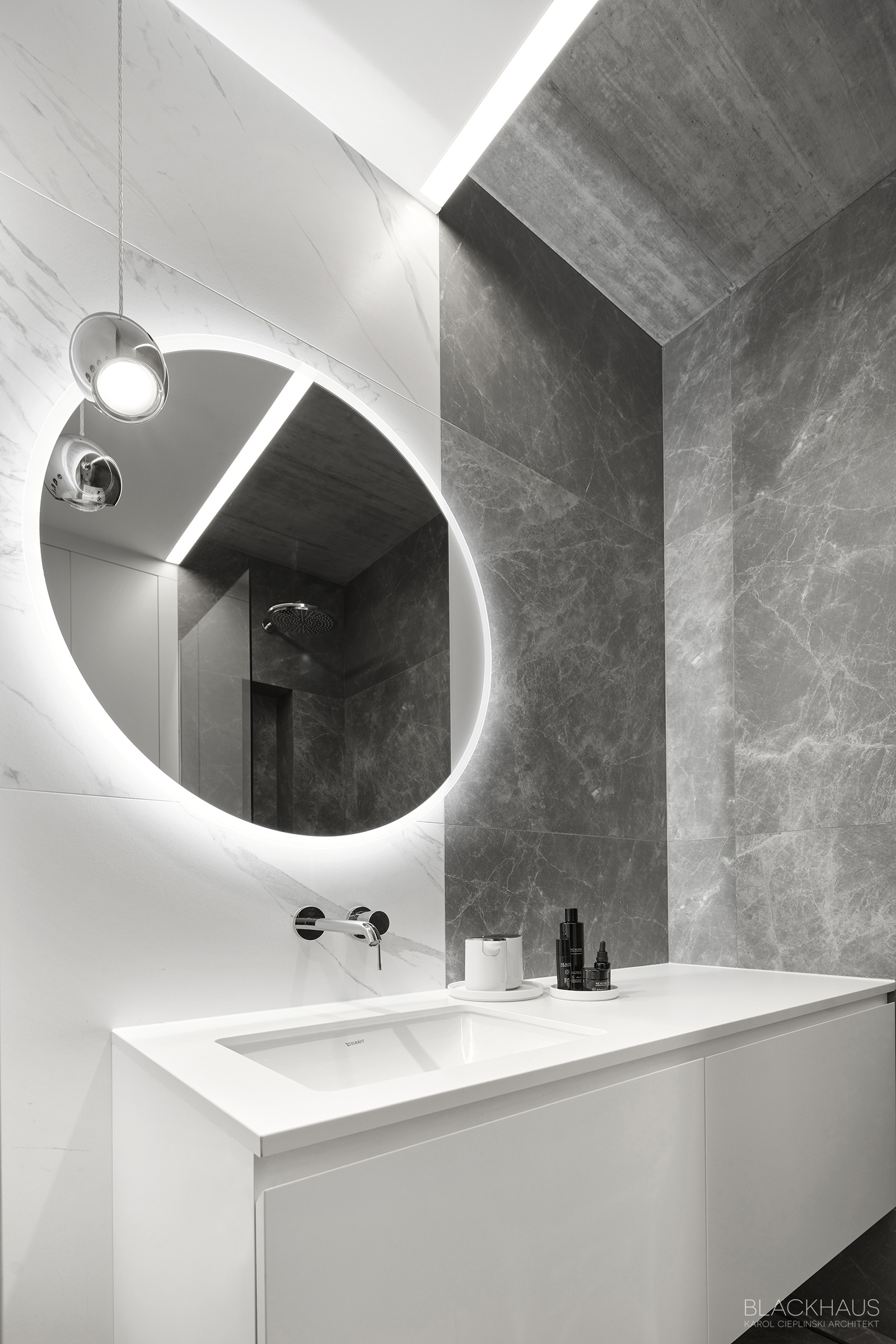 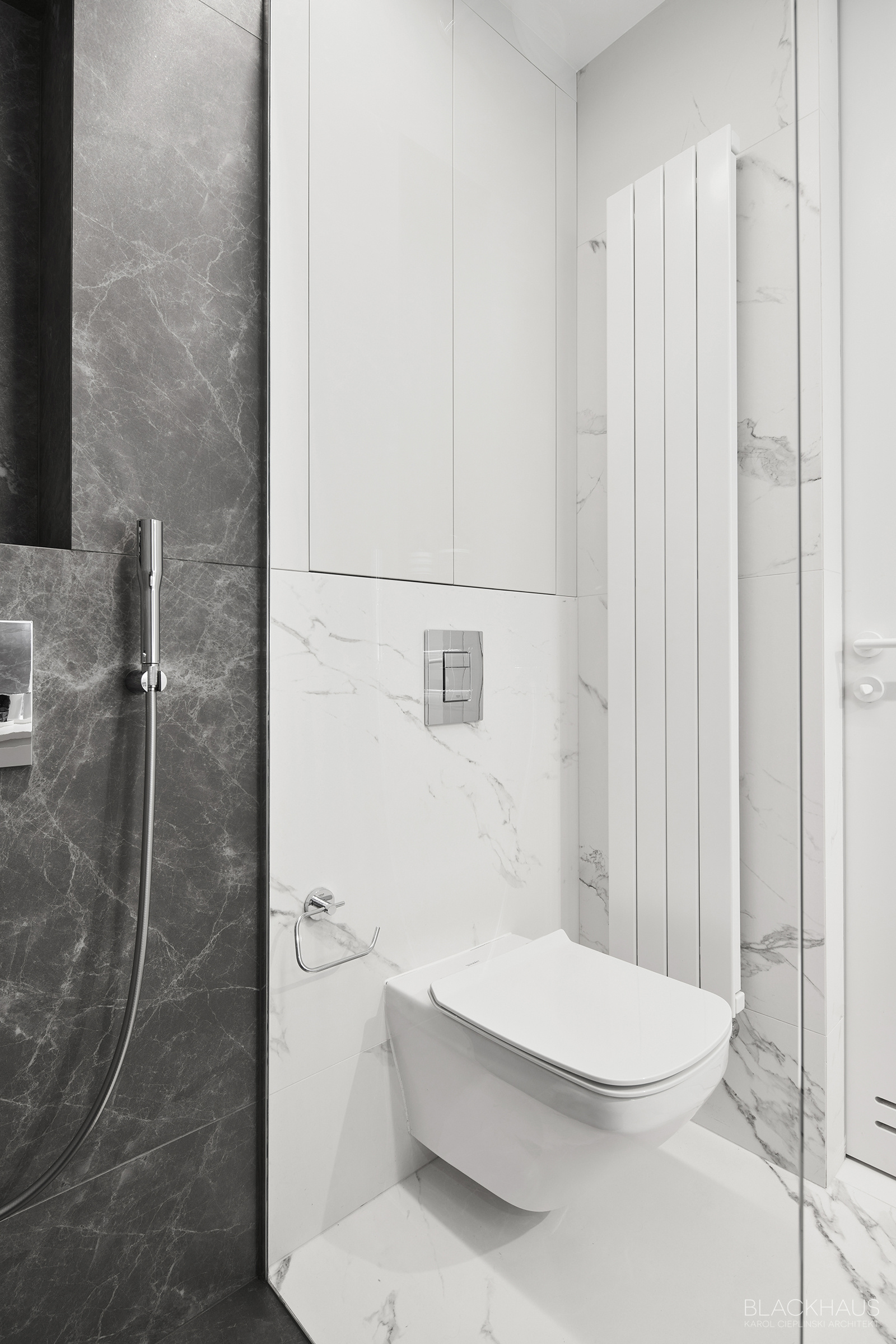 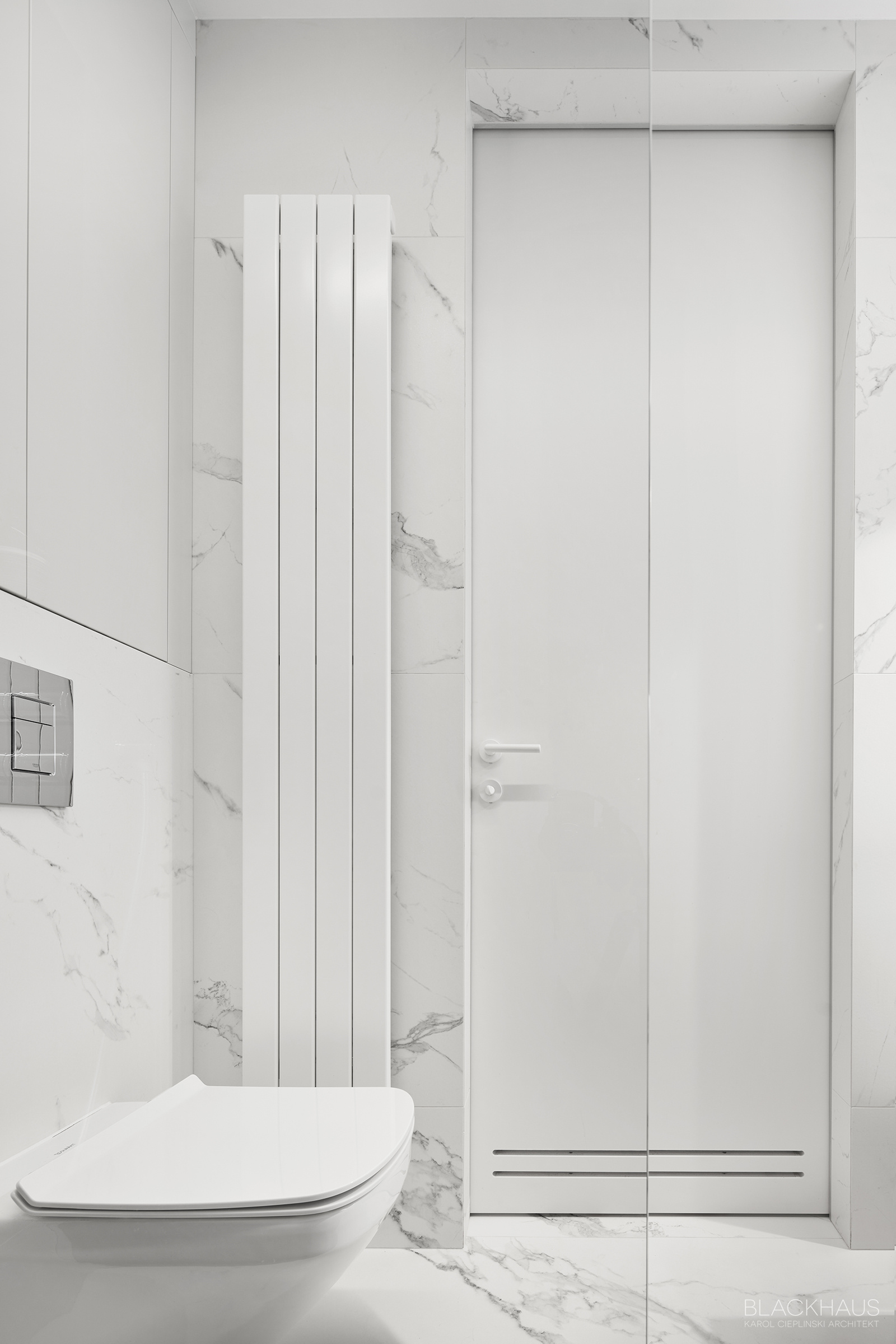